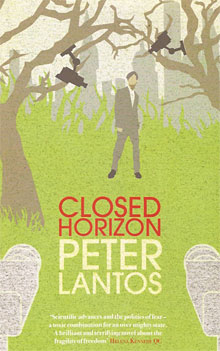 The year is 2040. Mark Chadwick is a brilliant psychiatrist who is on the verge of a major scientific breakthrough. By combining functional imaging of the brain with computer technology, he can not only predict intentions but also decode human thought processes.

It is this discovery which immediately attracts the attention of Robert Dufresne, a senior officer in Home Security who is determined to use this novel technique in the fight against the enemies of the Surveillance State. As Mark is relentlessly pursued by Dufresne, the changing relationships with his family, friends and colleagues come sharply into focus. Tragedies from the past cast shadows over Mark’s present conundrum.

This is a story of loyalty and betrayal, guilt and forgiveness, blackmail and courage. And the impossibility to reach an unequivocal moral judgement against the shifting values of modern society.

Closed Horizon is available in your local bookshop
and on-line.

Closed Horizon was published in 2012 by Arcadia Books and launched on 23 May of that year in Daunts Books, Marylebone High Street, London, W1.